Ellie’s love for her dad stretches far and wide. There’s nothing the 3-year-old English coonhound wouldn’t do to be with him. But when circumstances forced the two out of their home, her dad had to make the gut-wrenching decision to give her up. 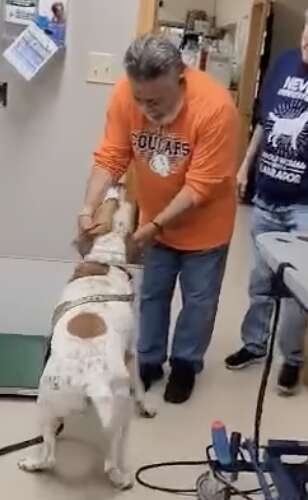 “We were contacted in June 2021 by our vet office to take Ellie,” Cara Seiler of Canine Haven Rescue Inc. told The Dodo. “Her owner was a client there, and he’d just lost his wife and had to move in with his daughter [who] didn’t allow him to bring Ellie.”

It wasn’t an easy decision, but Ellie’s dad made sure she’d be taken care of. 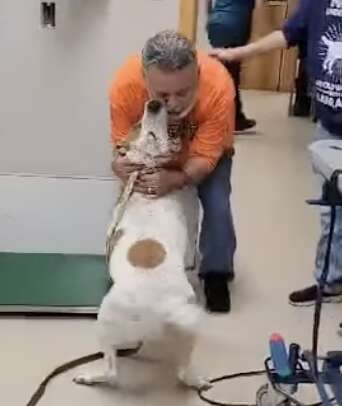 She went into a foster home where she remained for a year and half with zero interest from potential adoptions — something that still baffles Seiler.

“Her previous owner had kept in contact and even sent some toys and a jacket for her,” Seiler said. “Ellie is a very sweet and loving gal, so we have no idea why nobody ever applied to adopt her.” 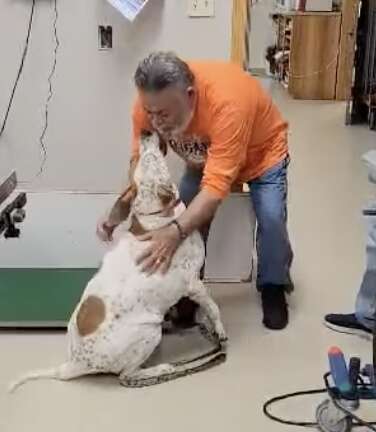 Ellie’s dad kept a close watch on her throughout their time apart.

“When we told him she was still here you could hear tears in his voice,” Seiler said. “He then said he was moving in with his sister in South Carolina and she loved dogs and he could take Ellie if we would allow him to have her back. So, we arranged [for them] to meet at our vet office.”

You can watch the emotional reunion here:

“She knew who he was the second he walked near the door,” Seiler said. “She was so excited to see her dad again.”

The happy pup went to live with her dad in South Carolina, and they’ve not left each other’s sides since.

“She was meant to be with [him],” Seiler said. “She had purpose.”
Advertisement Tiny Domestic Dog Knnut Covers His Friend Pail Together With His Paws In A Candy Photo Of Two Dogs Cuddling.